The Ninth Symphony is Beethoven's Mona Lisa. It is an iconic work that is immensely popular: in 1972 the theme from the last movement (the 'Ode an die Freude') was used as the basis for the European hymn and in 2002 the handwriting of the score was declared by UNESCO as ' World Heritage of Humanity'.

However, the importance of this symphony is mainly on the substantive level. More than ten years after finishing his Eighth Symphony, Beethoven finally found a solution to a problem he had long struggled with: he used a text, solo singers and a choir to give the final movement a weight in proportion to everything that preceded it. The fact that this text has a fraught political content gives this part - and by extension the whole symphony - the allure of 'a message to humanity'.

The Ninth was first performed on May 7, 1824 in Vienna. As always, Beethoven continued to file on the score afterwards. Contrary to what one would expect with such an iconic masterpiece, there is a uncertainty about the legitimacy of the musical text. For many years, researchers from the Beethoven-Haus in Bonn and the publishing house Breitkopf & Härtel in Leipzig have worked on a revised and cleaned-up edition of this music.

Le Concert Olympique and Jan Caeyers had the great honor of performing the world premiere of this restored version in Flanders, in March 2020. 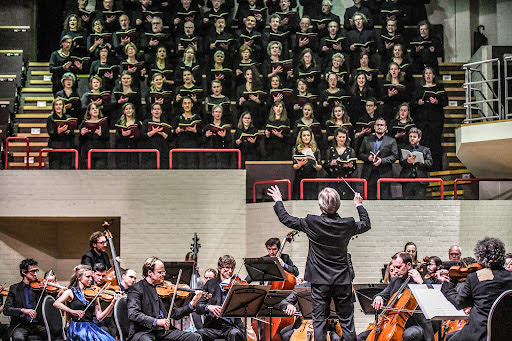