In November 2014, Le Concert Olympique performed Mozart's Clarinet Concerto, framed by Beethoven Symphonies Nr.1 and Nr.8 in Leuven, Hasselt, Antwerp and Rotterdam. Le Concert Olympique wishes not only to be innovative and ground-breaking in their interpretation of Beethoven, but also to reconnoitre unexplored musical paths of his contemporaries, such as Haydn en Mozart.

In this production, Le Concert Olympique performed Mozart's world-famous Clarinet Concerto, but this time in its original version for the basset horn. This larger type of clarinet has a much deeper and more nasal sound, giving this concerto a darker colour, expressing the more sombre and melancholic feelings which Mozart fell prey to several months before his death. This poignant concerto was framed by two lively Beethoven symphonies: No.1, which clearly exposes the influence of Beethoven's teacher Haydn, and No. 8, in which Beethoven, with a dash of humour and mild irony, lays his ‘heroic’ period to rest.

The soloist in this concert was the Israeli clarinet player Sharon Kam, who is considered to be one of the most prominent soloists of the younger generation. 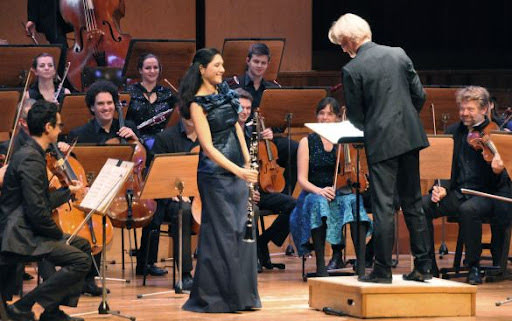