In the past five years, Le Concert Olympique has made a lot of headway, raising the bar in every area by several notches. A milestone and a highlight in the orchestra’s existence was the performance at the end of September 2015 in Antwerp and Bruges of Beethoven’s Mass in C Major with the collaboration of the world-renowned Arnold Schoenberg Choir from Vienna. According to the orchestra’s conductor Jan Caeyers, the Mass in C Major is a relatively unknown and long-underrated masterpiece in Beethoven’s vocal works. We asked Jan to share his thoughts with us on the subject:

“I feel as if several major themes in my life have harmoniously converged at this point in the Beethoven story: the relationship with deSingel, the relationship with the choir which dates from my time in Vienna and the relationship with my own orchestra which has evolved into a solid ensemble after five years. The magic is created when all these parameters coalesce with each other. The musicians’ performance was lifted by that of the choir while the choir’s timbre blended beautifully with the orchestra’s sound. This is something that you cannot force as a conductor. It only happens under exceptional circumstances I truly relished being able to share this special, almost magical experience with the audience.”

Did you know that...

... there were exactly 100 musicians on stage during this production of Beethoven’s Mass in C Major: 1 conductor, 4 soloists, 48 choir members and 47 orchestra members. They included representatives of no fewer than 15 nationalities, including Belgium, the Netherlands, France, Germany, Spain, Austria, Switzerland, Poland, Hungary, Russia, Estonia, Lithuania, Finland, Norway and Japan! 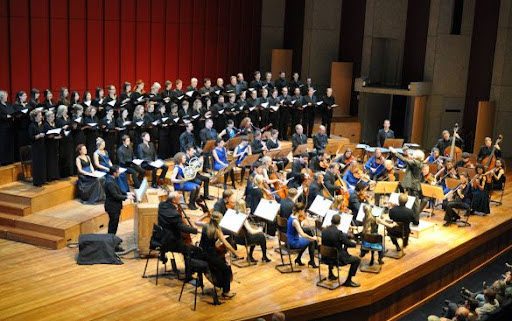