In March 2014, Le Concert Olympique performed a series of concerts called ‘Mozart and Beethoven in Prague’ in the most prestigious concert halls in Belgium (Brussels, Leuven, Antwerp, Hasselt) and in the Concertgebouw in Amsterdam.

Le Concert Olympique performed five works associated either directly or indirectly with Prague and in which an interesting light was shed on the musical relationship between Mozart and Beethoven.

The soloists were Lenneke Ruiten (soprano) and François-Frédéric Guy (piano).

It is impossible to imagine today’s international stage without Dutch soprano Lenneke Ruiten. After winning the International Vocalist Competition in ‘s-Hertogenbosch in 2002, her career has not looked back. Lenneke is a much sought-after soloist with an impressive list of credentials. She was absolutely captivating as Donna Anna in the production of Don Giovanni at the Salzburg Festival last summer.

François-Frédéric Guy is considered to be one of the most fascinating Beethoven pianists of his generation. His curriculum vitae is most impressive, with outstanding references from London to Washington, from Paris to Moscow. 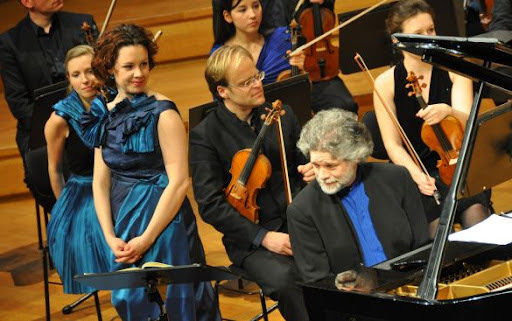